I am a PhD candidate at the Department of Sociology at the University of Cambridge, currently in the final year of my PhD. For the past three years, I have researched the micro-processes of political competition that determine the nature of power and patronage in Indian party politics. In specific, my thesis is an ethnographic account of the inner social world of the Bharatiya Janata Party (the BJP) and its party members in the city of New Delhi, and examines the maneuvers of the party’s complex and multi-layered organization in the city, as well as the repercussions of its emergence as one of the world’s largest political parties.

Through an account of BJP party members navigating the local party hierarchy to obtain a municipal election ticket in the elections of 2017, my work captures the aspirations, intentions, and rebellious acts of ordinary party workers coming to terms with the insecurity of forging a successful career in the party (as well as in urban politics). As such, it is a study of routine politics in political parties, and is concerned with who wins and who loses, and the informal rules and principles of political competition at the local and the state level. I am concerned equally with the language of ordinary politicking, and in the uses and presentations of power, charisma and leadership in Indian politics.

By using an ethnographic approach, I describe the social fabric of party relationships, the consolidation and negotiations of power in local politics, and the interplay between bureaucratic and unofficial party rules in the Bharatiya Janata Party. In my thesis, I discuss how this inter-play of formal rules intersects with informal workings of power creating uncertain outcomes in internal party dynamics, and ways of ‘gaming the system’ that experienced party workers use to gain political power. The relationship between the party leadership and the party workers is built largely on the patrimonial form of political patronage but playing within party rules gives the party workers the narrow advantage of having bureaucratic checks on the power of their political bosses, making political power possible in their reach, thereby consolidating the collective power of the party as well consolidating the image of the BJP as a more ‘democratic’ party in its appearances. At the same time, the inaccessibility of the party for ordinary party members is also evident, making the increasing centralization of power for party members a constant aggravation, and the BJP’s increasing orientation towards a mass party producing contradictory effects and fears of ideological dilution in the party. By taking a closer look at these dynamics, my work ties up with ongoing research on ‘vernacular’ understandings of democracies and political power in the Global South.

Part of my work also captures the difficulty of navigating the party organization as a woman political worker, and the paradoxical effects of gender on the race to political office. While the party exhorts women to join its ranks and offers them space to conduct politics, the gendered nature of social capital and the absence of a discourse offering women a clearly defined field of political praxis makes their political presence contradictory and imbued from uncertainty from the start. Using a feminist institutionalist lens, I examine the gendered nature of political parties, and look at the inter-play of formal and informal power, and explore how homosocial networks deter women and other minorities from gaining better representation in political organisations.

Besides my thesis, my research extends to the nature of clientelism and corruption in urban politics. In my forthcoming chapter (‘Political Parties: Machines Politics and Clientelism’, co-written with Dr. Manali Desai in the New Handbook of Political Sociology), we examine the nature of the complex moral economies of political patronage in political parties, and the ambivalent nature of solidarity and reciprocity in urban ‘machine’ politics globally from the Antebellum party machine in 19th century to contemporary political clientelism in South Asia and Latin America (https://www.cambridge.org/core/books/new-handbook-of-political-sociology/1EFEE42DD916582B4D101BEE22B1BE13). In another paper, presented at BASAS 2018 in Exeter, titled ‘Narratives of corruption and careers in party politics: Municipal Politics in New Delhi’, I look at the discourse around the inevitability of corruption in urban municipal politics, and the progression of careers in municipal politics as a form of rent extraction of the party from its elected municipal councilors, tying into the circular logic of urban brokerage.

Finally, my thesis is also a comment on the dissonance faced by political actors in everyday politics, where motivations of ideology and ethics confront the pragmatic world of negotiating and ‘doing politics’, as well as the boundaries imposed by the electoral environment of urban politics. It contributes to ongoing research on right-wing politics in India, as well as to studies of patronage, power, brokerage and corruption, and studies of South Asian politics in the vernacular. Other areas of my interest include ethnographies of politics, feminist politics, urban labour politics, elections and political representation, and social movements in South Asia. 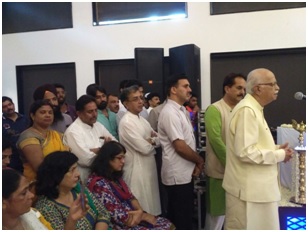 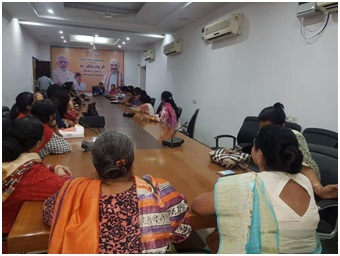 (Party members listening to instructions from the Mahila Morcha leadership at a local party office in New Delhi, 2017 (photo shared by respondents).