Temples dominated the landscape of India between the seventh and thirteenth centuries. Protected by kings and widely supported by endowments and other gifts, temples enjoyed ascendancy as centres of religious life, socio-economic power and artistic production. 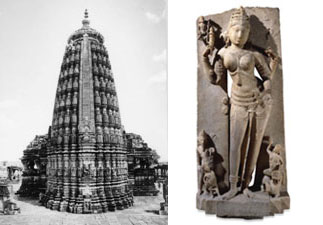 Photo (left): The Udayeśvara temple at Udayapur, Madhya Pradesh. Built by the Paramāra king Udayāditya in the eleventh century.

Photo (right): Standing figure of the Jain goddess Ambikā, dated 1034 in the reign of King Bhoja
The British Museum (Asia 1880. 19)

Although much research has been carried out on temple architecture since the late nineteenth century, key questions remain about how temples were patronised and constructed and the social place they occupied in medieval Indian society. A team of researchers, led by Dr Adam Hardy, Dr Daud Ali and Dr Michael Willis are exploring these problems.

Based on the preliminary work of the Narmadā Research Group, the research team secured funding from the AHRC to pursue the following problems:

(1) How were temples designed and built?

(2) What was the king’s role as a patron of architecture and Sanskrit letters?

(3) What was the social and political role of temples in medieval society? The objective of the research team is to achieve an integrated understanding of these questions, establishing thereby a new model of interdisciplinary research in the field.

The project centre-piece is the temple at Bhojpur, a massive structure near Bhopal in central India, that was left unfinished in the mid-eleventh century. It is associated with King Bhoja, one of India’s most notable monarchs. Around the temple are quarries with rock drawings and unfinished architectural parts, a unique survival providing insights into medieval processes of design and construction. Adam Hardy is exploring these processes. The builder of the unfinished temple was King Bhoja, a renowned polymath who composed important works on art, philosophy, yoga and poetics. Daud Ali is examining Bhoja’s literary output, his motivation for patronising the arts and his post-medieval reputation as an ideal king. Temples of this period received land and other revenue as endowments. Michael Willis is studying the geographical distribution of temples and their endowments as documented by Sanskrit inscriptions. This data sheds light on the place of the temple in the society and economy of the medieval state.

Objectives
The researchers involved in this project plan a variety of distinct outputs, ranging from scholarly monographs to articles and accessible web-based publications:
Monographs by the main investigators:
(1) A. Hardy: The Unchanging Centre of a Changing Universe: Bhoja’s Royal Temple
(2) D. Ali: King above all Kings: Bhojadeva as a Warrior, Polymath and Patron
(3) M. Willis: God, King and Temple: Theocratic Lordship in Paramāra India
(4) V. M. Jha: Political and Agrarian Structures in Medieval Central India
(5) O. P. Mishra:The Mother Goddesses and their Temples in Central India during the Gupta Period.

A catalogue of the British Museum’s collection of Indian temple sculpture will be prepared by A. Casile under the supervision of M. Willis. Preparation of the text of the Samarānganasūtradhāra with translation and commentary will be carried out by Mattias Salvini under the supervision of D. Ali. This unique Sanskrit treatise on art and architecture dating to the eleventh century has not been critically edited and translated.

The team is also planning an international seminar to explore the broader implications of the project, reassessing the nature and characterisation of the ‘medieval’ in a comparative context. The purpose will be to draw analogies and contrasts between the respective medieval religious architectures of India and Europe and to compare archaeological, theoretical and historiographical developments in the study of the medieval and its buildings in India and Europe. Issues will include the nature of state formation, the relationship of agrarian production and trade to the socio-religious order, and the use of surpluses by religious institutions for major building projects.

The team is also producing a special volume of Purātan devoted to the art and culture of the Paramāras. This annual is published by the Department of Archaeology, Madhya Pradesh.