Udayagiri and the Establishment of the Gods

Home » Projects » Udayagiri and the Establishment of the Gods
Staff Projects

Udayagiri and the Establishment of the Gods

Directors: Dr. Meera I. Dass, Bhopal and Dr. M. Willis, London, under permission from the Archaeological Survey of India

Udayagiri is a large sandstone mountain located a few kilometres from Vidisha in central India. It is one of the few surviving sites connected with the Imperial Gupta dynasty (c. 320-500).

Udayagiri was an ancient centre astronomical activity from at least the 2nd century BCE. When the Gupta kings conquered central India they re-worked Udayagiri dramatically, adding a host of sculptures, inscriptions and water-features. This changed the site from a simple place of celestial observation into an astro-political node where the movements of the heavenly bodies were conflated with the political trajectory of the Gupta kings. This helped the Guptas establish a new form of kingship in which they represented themselves as imperial sovereigns and, simultaneously, the foremost devotees of Vishnu, the deity who was the living embodiment of time and of the cosmos. 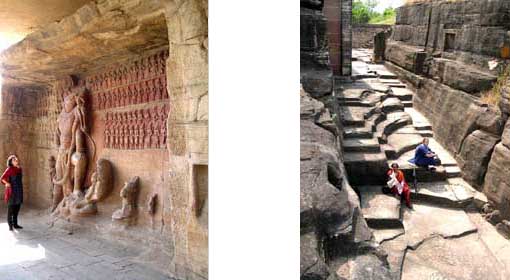 Photo (right): Udayagiri, view of the passage used for astronomical

The organisation of time – and of the Indian calendar and festival cycle – are determined by solar, lunar and stellar observations. At Udayagiri, the necessary observations were facilitated by the geographical features of the hill, features which were modified and supplemented to enhance and symbolically enrich the observations. In Indian speculative thought, the calendar and year were subject to an elaborate series of homologies. So the year, among many other things, is the royal consecration – because the consecration takes a year to perform – and the year is the sacrificial horse – because a horse is the central offering in the year-long horse-sacrifice used to confirm the king’s paramount status. The year is also the god Vishnu – he is the lord of time and, according to ancient lore, absorbed the sacrifice, and thus the year, into his body. The year is also the firm foundation of all created things – all life is controlled and conditioned by time. Because Udayagiri was a place where time was known and the year made, it became a natural, if not inevitable, place for visualising and memorialising time and the sacrifice, so also Vishnu – the theistic embodiment of both. This is how Udayagiri can be described as a sacred landscape in every sense – a place where the knowledgeable pilgrim can directly encounter time and thus the god who embodies it. Udayagiri through these various means is a crucial site for the religious and cultural history of India because it documents the transition from ancient modes of sacrifice to theistic and devotional forms of worship.